If you happen to be a landlord with rental properties in Front Royal, VA, beware of drug labs that could be lurking on one of your properties. If you ever suspect that your tenants have set up a drug lab on one of your properties, the best way to handle any drug-related issues is to leave it in the hands of law enforcement. As a landlord, you have the right to inspect your rental by giving heads up that you are going to do a walkthrough. It helps to know what to look for.

Most ingredients used in making methamphetamine are not dangerous, but some are hazardous. These chemicals can include everything from acetone to cold tablets and can include—

During the walkthrough of your rental property in Front Royal, VA, be aware if some of these items are stockpiled in greater amounts than most families would use normally. Some other tell-tale signs include—

Most of these items are usually sitting around generally in homes, but if these items are gathered together in large amounts, you might have a drug lab doing business on your property and will need to hire a drug lab cleanup professional in Front Royal, VA to clean up the mess safely.

The Virginia Department of Health Board recommends that before any assessment or drug lab cleanup can be done at the property in Front Royal, VA, law enforcement should secure the building. Manufacturing meth is extremely dangerous and causes health risks including the potential for an explosion. Once the seizure has been completed, and before the drug lab cleanup is completed, residents and others should wear protected clothing; it is best for everyone to stay clear of the area until the drug lab cleanup has been completed and it is safe to go back into the Front Royal, VA home.

Whatever you do as a landlord, do not under any circumstances try to save money and take on a drug lab cleanup on your own. Drug lab cleanups take experienced and knowledgeable professionals so that once the job is done, it is safe for new tenants to move into your rental property in Front Royal, VA. 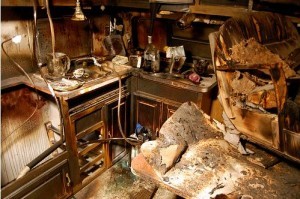 Whenever a meth lab is discovered or suspected, authorities and certified environmental specialists put their safety on the line to perform professional drug lab cleanup for Culpepper, VA, property owners.

Methamphetamine makers are using a creative assortment of locations, including “mobile meth labs,” high-end luxury homes, and continuing health care facilities to house their one-pot meth cooking rigs. Law enforcement cites a recent bump in the use of the ‘shake and bake’ method for cooking meth as a major factor contributing to the increase in lab incidents that threaten communities across the nation.

How do you know a site has been home to a meth lab near your Culpepper, VA, home? Cleanup experts say to look for these telltale signs:

Effective July 1, 2015, home sellers and landlords in Virginia are required by law to disclose the known use or production of methamphetamine in a residence. The disclosure must state if the property has not been cleaned up in accordance with federal and state regulations.

Call Envirotex and your local authorities if you suspect a meth lab is operating in your rental property or neighborhood. Envirotex has the certification, experience, high-level training, and high-tech resources to provide you with comprehensive meth lab cleanup in Culpepper and throughout Virginia.

There are serious, even deadly, risks associated with drug lab cleanup in Richmond, VA. It affects residents, neighborhoods, law enforcement and the trained professionals that provide drug lab cleanup services.

Unlike cocaine, marijuana, heroin, and other naturally derived drugs, synthetic drugs, including methamphetamine, opiates, cathinones, and cannabinoids, are manufactured using common chemicals and toxic substances. According to the White House website 51 new synthetic cannabinoids, 31 cathinones, and 76 other synthetic compounds were identified in 2012 alone. Street names such as Molly (MDMA), Spice, Bath Salts, and Krokodil are now familiar across the U.S.

All of these so-called designer drugs pose a frightening threat to individuals, buildings, homes, and neighborhoods. A recent development is the alarming increase in mobile or traveling drug labs, which demand a new angle for drug lab cleanup in Richmond, VA.

There are significant dangers created by the swirl of environmental contamination left by the manufacturing of synthetic drugs, the residues of which can permeate building materials and leave behind a mini hazardous waste site. Drug lab cleanup in Richmond, VA, is often done long after an illegal drug lab is abandoned, or after police have made arrests. In either case drug lab cleanup in Richmond, VA, is expensive, harrowing, and performed by environmental specialists specifically trained to deliver effective decontamination for locations once used to produce synthetic drugs.

Harmful fumes and highly explosive chemical compounds make drug lab cleanup in Richmond,  VA, a high-risk for anyone in the surrounding area. If you suspect an illegal drug lab is near your home or workplace, touch nothing, vacate the area immediately, contact the authorities, and call the environmental experts at Envirotex Environmental Services – specializing in safe, effective drug lab cleanup for Richmond, VA, residents.