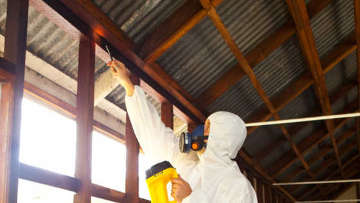 The History of Asbestos and Asbestos Testing in Washington, D.C.

Asbestos: A Journey from Wonder Material to Toxic Danger

For decades, asbestos was considered the builder’s wonder material, treasured as the stuff that prevented fires. It was versatile, didn’t conduct electricity, insulated people and objects from heat, and did it all inexpensively.

Envirotex is a licensed asbestos testing and removal contractor. We offer:

By the 1970s, it was associated with lung disease and cancer. Now it is the stuff of lawsuits and expensive removal efforts. That’s why asbestos testing and removal in Washington, D.C., and all over the country is considered essential for old buildings and homes.

Here is a look at how this miracle material turned into a nightmare for homeowners, businesses and governments.

Asbestos was used in pottery and log homes more than 3000 years ago. The first known quarry, located on Evvoia, a Greek island, was in use thousands of years ago.

The ancient Romans understood its flame retardant qualities, using it for tablecloths in public eateries. The tablecloths were extremely practical. Restaurant owners could simply throw the cloth into the fire to get rid of leftover food and debris, then shake it out and put it back on the table for the next patron.

The Romans also used it to make female clothing. At a time when fire was used for heating and cooking and was hard to control, it lent a feeling of security to the well-dressed woman.

It was so practical that a historian from the First Century A.D. said it even protected people from spells. Egyptians used asbestos as one of the ingredients for embalming their Pharaohs. In the Middle Ages, knights used asbestos to insulate their armor.

Over the centuries, it has been called a variety of names, including:

These names reflect its appearance. Asbestos is a natural substance made up of six fibrous minerals. The fibers are extremely small and come in bundles that are long and thin. It can also take the form of a rock-like substance. When the rock is crushed, the asbestos is released.

It has several valuable properties, appreciated for thousands of years, most especially its strength and resistance to heat. These made it a natural for roofing, ceiling materials, floor tiles, textiles, an addition to cement, insulation, brake linings and other automotive parts.

Asbestos came into its own in the Industrial Revolution in the 1800s. Because fires in the primitive factories of the day were common, asbestos was in widespread use. It made excellent insulation, and was used widely in building materials and fabrics because it was a natural fire retardant. This extensive use continued right through the 1970s.

But it was long known that asbestos had a dark side. Greek and Roman historians commented thousands of years ago that slaves who worked in asbestos quarries died young. Ancient physicians even came up with a rudimentary respirator made from bladder skin. It helped workers affected with lung problems from asbestos breathe easier.

In the late 1800s, asbestos dust was linked to heart problems and a thin and weak physique. An autopsy of an asbestos worker in 1906 identified fibrosis as the cause of his death.

It was so widely accepted that asbestos caused health problems that insurance companies in 1908 started reducing the number of policies they offered and limited benefits for people who worked around asbestos. In 1929 a county coroner demanded a public inquiry into the death of an asbestos worker.

Asbestos was simultaneously the wonder material and a common cause of illness and death. But it wasn’t until the late 1970s that the government started regulating asbestos. Today it is strictly controlled and considered a hazardous material. Asbestos testing in Washington, D.C., and other areas is now standard procedure on old homes and buildings before renovation, remodeling or demolition.

Is Asbestos on Your Property?

Because asbestos was used so widely in building materials, many old homes, offices, factories, schools and other structures still harbor it. It is essential to find out if it is still present and then to get rid of it. The health of you, your workers and your family depends on it.

If you suspect you have asbestos in your walls, roof, tiles or other spots, don’t start digging into walls in order to make sure. This spreads the fibers, which you and others in the area can breathe in.

Professional, accredited asbestos testing in Washington, D.C. can find deposits of asbestos. It involves inspecting the structure and testing for its presence. Trained, licensed asbestos abatement contractors, like those at Envirotex, have the training, safety equipment and tools to do the job accurately and safely.

Sometimes asbestos is uncovered by accident. A storm or natural disaster can tear apart a home or building, exposing the asbestos in walls, insulation or ceilings. Homeowners who decide to remodel their home can accidently expose it. This often happens when they decide to update their 1960s era popcorn ceilings.

Owners of commercial properties, like offices and factories, are required by law to test for it and remove any that is found.

How Asbestos Testing is Done

Experience counts when it comes to asbestos testing and removal. The experts here at Envirotex know how to date older buildings and identify which buildings were most likely were constructed with it.

They also know where to look for it. Here are just a few of the most common spots:

Several methods are used for asbestos testing in Washington, D.C. Air samples are measured using state-of-the-art microscopy processes. It is fast and affordable. This can be done right at the site, so it is commonly used for environmental monitoring, clearance testing for abatement jobs and for personnel monitoring.

Testing settled dust and other non-building materials is another method. This is used to determine baseline levels and check the build-up over time. It can also decide if there have been episodic releases.

Soil and sediment testing is used at environmental sites. One common use is to investigate whether or not construction material containing asbestos has been illegally dumped.

Water and aqueous sample testing is used to check for the presence of asbestos in drinking water when old pipes are replaced or somehow disturbed.

Can it be Removed?

Once the experts at Envirotex have done the asbestos testing in Washington, D.C., and confirmed that it is present, what is the next step? As a licensed asbestos abatement contractor, Envirotex can then get it out of your building.

This is a complex procedure that starts with containment and moves on to its safe and thorough removal. Then the site must be decontaminated so it is safe to use again. Envirotex safely and legally disposes of the asbestos material that technicians remove.

DON’T Do it Yourself

All of these steps require extensive classwork and practice before a person is licensed to do asbestos testing and removal in Washington, D.C. That’s why do-it-yourself asbestos removal is never recommended.

There is simply too much danger involved. In an effort to save money, you can easily release asbestos into your home or office. This can cause serious illness and death for the people who breathe in the asbestos fibers and dust.

The process is also time consuming and messy. The chances of saving money are slim. More likely, you will need to hire a licensed team for asbestos testing and removal in Washington, D.C. anyway, just to clean up your mistakes and make the structure usable.

Once you finish the project, you will need to get rid of the old asbestos construction material. This requires special bins for storing and double-seal bags. By law, all of it needs to be properly labeled.

Before you start the project, you need to find a landfill that will accept the hazardous waste. Disposing of asbestos is a highly regulated process and it doesn’t come cheap.

And before using your home or office you will need to get the rooms checked with asbestos testing in Washington, D.C., to make sure the removal was actually successful.

Here at Envirotex, we have been removing asbestos since 2000. Each member of our team is highly trained and fully licensed and certified. We have the experience to recognize where asbestos is typically located on old structures. We have the safety equipment, the tools and the training to do asbestos testing in Washington, D.C., and to remove it thoroughly. When we are finished with your home or commercial property, it is safe and ready for use again.

In addition to asbestos testing and abatement, we handle a range of environmental issues, including:

We have been serving the Washington D.C. area for asbestos testing and other hazardous waste services for over a decade. We take pride in our thoroughness, attention to detail and legal regulations, and superior customer service. We understand how important it is to get your property back to usable condition, safe and operational.

The job was to remove all the old rock-wool insulation and 60-years of dust, bird droppings, and dirt from the attic so that new fiber glass insulation could be installed. Dan's team of workers did a super job in cleaning the attic of all this stuff. I could find nothing remaining between the joist or in corners of the attic. It was so clean that you could have food served on the floor in the attic. They were on-time, completed the work as scheduled, and the work team was professional, organized, and experienced. Highly recommend Envirotex.