What to do if You Have Asbestos Shingles in Warrenton, VA 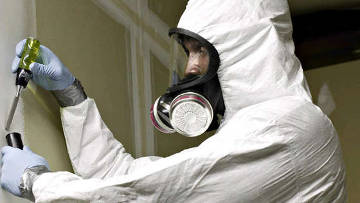 Removing Asbestos Shingles in Warrenton, VA Can Be Harmful

Asbestos is bad news. If you watch any TV at all, you’ve no doubt seen the late night infomercials about class-action Mesothelioma lawsuits. It’s a particularly nasty form of cancer, caused by asbestos exposure.

The material has a number of attractive qualities including the fact that it is fireproof, long lasting, and has excellent insulating properties. As such, it was widely used in construction, starting in the 1920’s, up through the 1980’s, when the EPA issued the Asbestos Ban and Phase Out Rule on discovering the material’s deadly attributes.

Given its longevity, it is estimated that as many as 80% of the buildings constructed prior to 1981 have asbestos somewhere in or on them. Asbestos shingles in older Warrenton, VA homes are quite common, and the question is, what to do about them?

If you have asbestos shingles on your Warrenton, VA home, you may be tempted to roof over them when it’s time to re-roof your home.

While it’s true that asbestos shingles aren’t harmful sitting on your roof, the problem is that when you disturb them, deadly particles can be released. Nailing a new layer of shingles atop the old definitely counts as disturbing them, and can lead to serious problems that can have tragic, or even lethal consequences.

Because of that, our recommendation is to have them removed, rather than roofing over them, but removal isn’t a trivial undertaking. They tend to be extremely brittle, and removing them without proper care can cause them to break, creating just as many problems as driving nails through them can.

For this reason, it’s extremely important that you not attempt to remove the asbestos shingles on your Warrenton, VA home by yourself. Expertise is required, and that’s exactly what Envirotex brings to the table.

Founded in 2000, Envirotex Environmental Services has grown to become one of the leading environmental services companies in the region and has been awarded numerous government contracts for the safe removal of asbestos, mold, and a variety of other environmental contaminants.

Our commitment to excellence is second only to our commitment to safety. Our owner, Mr. Freeman, insists on nothing less, and his experience with the safe handling and disposal of hazardous materials during his time in the military makes him, and Envirotex, uniquely qualified to handle asbestos and mold remediation issues now that he has transitioned to civilian life.

The bottom line is, if you have asbestos shingles on your Warrenton, VA home, there’s really only one company to call. Envirotex has the expertise to see that they’re removed and disposed of in a safe, professional manner, which makes your home a healthier place to live.

If you’re not sure, we can also test your home for the presence of asbestos to take all the guesswork out of the equation. Call us today. You’ll be glad you did.